10 Most Common Auto Insurance Claims and How to Avoid Them

If you can avoid auto claims, it will save you big time on your insurance costs. The rate you pay is based, in part, on your past driving and claims history. While no one wants to have an accident, they do happen on occasion. That’s why we call them accidents, after all. Auto insurance is an important part of protecting yourself and your assets.

Even more, it can save you time and injury if you can keep your car and its occupants safe. Here are 10 of the most common auto insurance claims and tips on how you might avoid them.

First of all, both your personal auto insurance and business auto insurance cover the damage to your autos with a theft of catalytic converter, as long as you have full coverage. You should open a claim an the payment will be processed with comprehensive part of your insurance policy.  You’ll likely need to pay your deductible. Thieves have targeted catalytic… Read More »Catalytic Converter and Insurance

As of September 2018, 37 states require carriers to report coverage on vehicles they cover to departments of motor vehicles. Many states require data for commercial vehicles and have rigid timelines for reporting based on the coverage effective date. Some states are considering fines for continually exceeding their timelines. Police patrol cars now scan vehicle license plates for up-to-date insurance coverage and are more likely to rely on DMV supplied information rather than an insurance ID card. It has never been more important to provide timely and accurate information for DMV reporting.

The information below is to inform you of how DMV accomplishes reporting, what is reported when the reports are submitted, and what can happen if there is no report.

All Insurance You Need For Your APU Waste Haulers Business Company 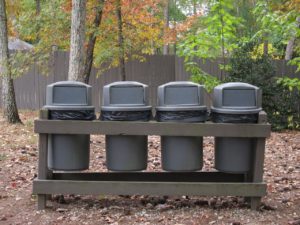 You shouldn’t have to wonder about the quality of coverage for your waste hauling business, or whether the program will be around the next time you need to renew. Our team has more than 30  years of experience in this segment. Serving the industry, this long-standing program is stable even as market availability, in general, may be decreasing.

Our waste haulers program incorporates comprehensive insurance coverage for companies engaged in almost any type of non-hazardous waste service activity, is available on admitted paper with excess coverage up to $10M, and offers competitive rates. Our carriers are A.M. Best Rated A+10 and American-owned.

For organizations that operate vehicle fleets, it’s important to have a formal, effective safety program. It establishes the policies and procedures that are needed to ensure a safe work environment for your employees. It can also help protect against liability for vehicle accidents – a significant exposure for most fleets – and helps control accident costs. To be effective, a formal… Read More »Fleet Safety Program

Prepare RV for Winter to Prevent Claims in Spring

If you have made the decision to end your camping season for the winter, you’ll need to perform some routine preventative maintenance on your RV to avoid expensive repairs in the spring. Depending on where you live, winterization can be done at a local RV dealership for a nominal fee, but many RVers opt to handle these duties themselves. This handy checklist should… Read More »Prepare RV for Winter to Prevent Claims in Spring

A vehicle accident that results in an environmental hazard is, for most businesses, an occasional occurrence. Yet every business that is on the road needs to be prepared for such an event. We offer access to the exclusive Environmental Transportation program  which can help you handle accidents and spill emergencies.
This program offers the ISO “Pollution Liability-Broadened Coverage for Covered Autos” (CA 9948) and is available for both trucking and business auto risks.

The Miscommunication and Misuse of Motor Carrier Data

When assessing the safety of a commercial auto operation, there is more freely available information today than ever before. As with all data that is easily accessible in the information age, there are people trying to capitalize on how this information is used. In a prior article, CAB Usage in Underwriting Truckers, we discussed how insurance companies and underwriters utilize this data to try and better determine the safety culture of an operation. However, the use and interpretation of this data is not limited to the insurance industry, which is leading to disputes over the measurements gathered and the availability of data.

First, let’s quickly establish what data we’re talking about. The Federal Motor Carrier Safety Administration (FMCSA) created the Safety Measurement System (SMS), the source of this data, and its associated scoring methodology as part of the CSA 2010 initiative. The intent of the initiative was to make the roadways safer by identifying those trends in motor carriers that might show a direct connection to loss frequency. Determinations for trends and scores are based on the aggregated history of all DOT violations that are discovered during the roadside inspection of a motor carrier, and it is this violation data – ranging from a cracked windshield to speeding in a school zone – that is the focus of the current dispute.

The Problem with the Data
1. The relative scale on which a motor carrier’s SMS score is determined suggests that there will always be a subsection of motor carriers (10%) on the road that are deficient and should be removed from the roadways. Without question, the intent of the SMS model is to make the roadways safer, and eliminating those motor carriers who are presenting a greater hazard to the public by their actions is one of the best ways to go about doing this.  However, without establishing a true baseline by which motor carriers can be judged, a situation is created where the same operation which has been deemed acceptable today may be deemed deficient at the next review. Similarly, an operation in one peer group may be deemed acceptable while an operation with the same history in a separate peer group would be deemed deficient.
The strongest argument in support of the relative scale is that the flexible nature encourages motor carriers to constantly better their operations, and that the number of new entrants into the market will offset the percentages that are being removed from the roadways. Were peer groups not a factor in the model, the argument would have a stronger footing, but with its inclusion in the model, there is still an inconsistency whereby the same quality risk may be deemed both acceptable and unacceptable based solely on the peer group in which they fit.

2. The methodology used to determine the severity weights for each violation has been brought into question by insurers and associations that represent motor carriers, as the stated score isn’t necessarily indicative of an accident. The most frequently cited example of a questionable score is a seat belt violation – where a driver failing to wear his or her seat belt is assigned a severity weight of 7, and considered a greater indicator of accident frequency than violations such as following too close, failing to yield right of way, and failing to obey a traffic control device.Read More »3 Problems Motor Carriers Face with the SMS Model