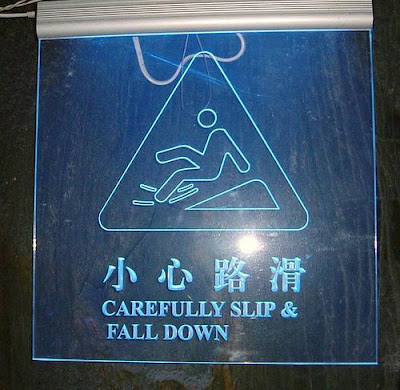 Tips You Need to Avoid Fraudulent Slip and Fall Claims

Slip and fall claims represent a significant fraud risk because they can be easy to fake and difficult to disprove. And any location where the public is invited—grocery stores, restaurants, banks, etc.—is vulnerable.
Opportunities Abound
“The people who would attempt insurance fraud see a wet floor or a grape on the floor as an opportunity,” said Jack McGoldrick, Director, Hartford Special Investigations. “There are people who make an absolute living at it.”
In some instances, the fraud artist will even create an opportunity. In a recent case in a Texas sandwich shop, one employee claimed to have slipped in a puddle of water and injured her shoulder. She promptly left work and sought medical treatment.
Caught in the Act
In a routine review, the Hartford claims handler discovered another slip and fall claim in the claimant’s history and referred the case to the Special Investigations Unit. The investigator visited the sandwich shop and was able to access security camera footage. The surveillance video revealed that the claimant had sprayed water on the floor before lying down in it and calling out for help. It was an open and shut case at that point.
The employee was fired. The claim was denied. The case was referred to the Texas Department of Insurance Fraud and the National Insurance Crime Bureau, which presented evidence to the district attorney’s office for possible prosecution.
Watching for Fraud
The preceding example shows that while fraud can be overlooked, Hartford claims professionals are well trained to spot indicators of possible fraud and to investigate those cases. Further, it demonstrates that while fraud can be difficult to prove, with the right precautions, business owners can protect themselves.
Video cameras, according to Hartford Special Investigations Manager Odie Waters, are one of the most effective measures a business can undertake. “Surveillance systems are not that expensive to purchase and maintain,” he said. “And they can save you a lot of trouble.”
In addition to reviewing video footage, The Hartford investigator may take other steps to investigate potential fraud, such as visiting the scene, interviewing the claimant and witnesses, and verifying that the claimant’s treatment actually takes place.
Tripping Up Fraud Artists
A business can also take steps, both before and after an incident, to reduce its exposure to fraud:

If anything about an incident makes you suspicious, alert the claims handler.